The positron source is comprised of a Tungsten moderator assembly surrounded by a Cadmium shroud located adjacent tothe PULSTAR core in beamport #6. Positrons are created when gamma rays emanating from the reactor, and from neutron capture in the Cadmium shroud, interact via pair production with the Tungten nuclei (see graphic below). 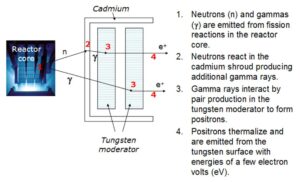 Positrons are then extracted from the moderator assembly and focused using electrostatic lenses. 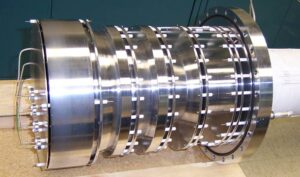 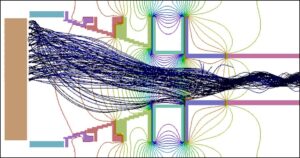 The positron beam exits reactor beam tube #6 and is transported to experiment stations in adjacent laboratories via the beam switchyard. 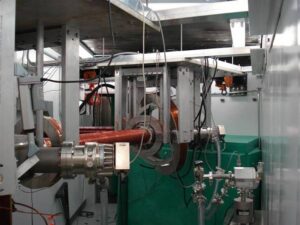 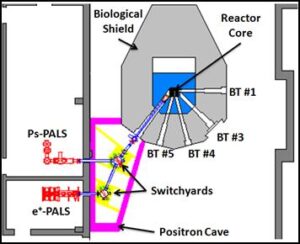 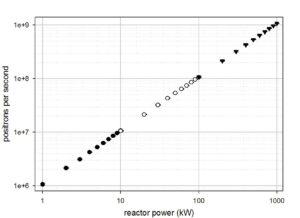 Positron beam intensity at the end of the beamline as a function of reactor power.

The positron beam arrives at the spectrometer experiment stations with the profile measured below: 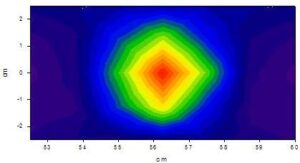 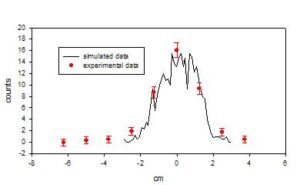 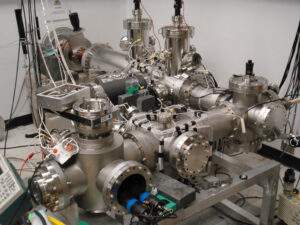 The Ps-PALS spectrometer is dedicated to the measurement of lifetimes in materials where positronium formation is promoted. The beam is extracted from the magnetic field and undergoes two stages of brightness enhancement before being focused onto the sample where a secondary electron timing technique is implemented. The timing resolution of this spectrometer is ~ 0.5 nanosecond. This spectrometer provides a 1-2 mm diameter beam spot on target at beam energies up to 30 keV in a zero magnetic field. 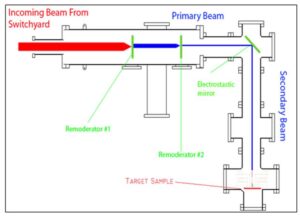 The beam is accelerated to 8 keV after it leaves the magnetic field and is electrostatically focused to a diameter of 20 mm on a 100nm thick tungsten transmission foil remoderator (the small reduction in beam diameter from 30 mm to 20 mm is due to the large (500 eV) spread in the longitudinal beam energy in the 0.006 T guiding field). After acceleration to 5 keV the remoderated beam is focused to a 1-2 mm spot on a second transmission foil remoderator and after further focusing, the final beam on target can be ~1 mm diameter at even the lowest beam implantation energies. The on-target positron rate is 5×106 s-1, and a typical lifetime spectrum can be acquired in less than one minute.

The start signal for the lifetime measurement is obtained from a channel electron multiplier array (CEMA) detecting secondary electrons, emitted when positrons impact the target. The positron beam passes through a co-axial hole in the CEMA and strikes the sample target about 1 cm behind it. A subsequent annihilation gamma-ray is detected in a bank of ten fast-plastic scintillation detectors and a time digitizer measures and records the time interval for each event. Timing using secondary electrons is limited to approximately 0.5 ns due to the energy and angular distribution of the reemitted but this time resolution is acceptable for measurement of positronium lifetimes in polymers and insulators. 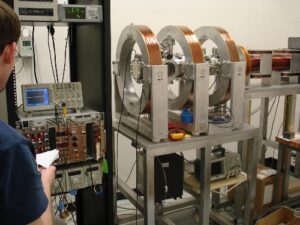 The e+-PALS spectrometer is dedicated to measuring positron lifetimes on the order observed in materials such as metals and semiconductors (i.e., lifetimes in the range of 300 picoseconds or less). The instrument utilizes time varying electric fields to generate narrow bunches (<300ps) of positrons with a 50 MHz rep. rate and the beam is magnetically guided to the sample, which can be biased to negative potentials to vary the implantation energy. Positrons entering the spectrometer are first implanted into a 1cm diameter, 100 nm thick single crystal tungsten remoderator foil to which a 50 MHz ramp voltage is applied. This acts as a pre-buncher for the main bunching stage. 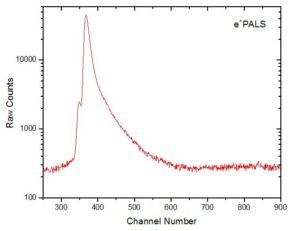 The velocity modulation is optimized by changing a DC offset placed on the moderator ensuring that the focal point of the pre-buncher is at the entrance of the main buncher. This is a double gap device comprising a 9 cm long tube with a 50 MHz, 280 V sine wave applied, to achieve time focussing at the sample. The length of the bunching electrode is calculated so that positrons entering the buncher exit in phase with the applied sine wave, the amplitude of which is chosen to result in optimum time focusing at the sample. The positrons arrive at the target in pulses of around 120 ps. The overall time resolution of the system is around 220 ps. (see Figure – Lifetime spectrum).

Positron/Positronium Annihilation Lifetime Spectroscopy (PALS) as a powerful non-destructive technique has been utilized for decades in characterizing defect and free volume properties of a wide variety of materials. In many insulating materials, positrons can form positronium (Ps), a metastable bound state of a positron and an electron. The fundamental idea of the technique is based on the fact that positrons and Ps naturally seek out the defects and voids due to coulomb and dielectric interactions. Using quantum mechanical models, one can correlate positron/Ps annihilation lifetime to the defect/void size from where it annihilates. Pore sizes ranging from several angstroms to ~30nm can be determined. 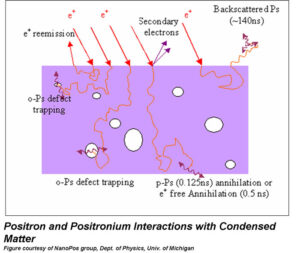 Traditional bulk PALS has been used to study many thick (>hundreds of microns) materials, but it is limited by the deep penetration of positrons directly from radioactive source. The utilization of low energy beams of positrons wherein the positron’s implantation depth can be controlled vastly expands the possible applications by enabling the study of thin films, surfaces, interfaces, and depth-dependent phenomena. In particular, beam-based positron spectroscopics have demonstrated great utility in characterizing very thin films on thick substrates. By controlling the implantation energy of the positrons, one can probe different depths of the materials underneath their surfaces (see Figure – Positron Implantation Profile). 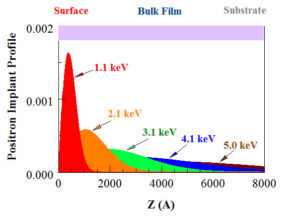 This is very useful in understanding the heterogeneity of the defects and pores, properties underneath barriers and the barrier quality, bilayer/multilayer films, interconnectivity of nanopores, and so on. Our beams have capabilities of implanting positrons at energies from 0.5keV up to 10keV, which correspond to depth profiling capability of ~10nm to several microns.

For more detailed information about the applications of PALS, please refer to this review paper.

We welcome requests for measurements and collaborations from both academic institutions and industrial partners. Please contact the Manager of Engineering and Operations if you are interested in learning more about applications of the positron spectrometers.