During the week of October 29th, 2012, the “International Workshop on Secure Operations and Applications at Research Reactors” was held at the Nuclear Reactor Program of North Carolina State University (NCSU). The event was sponsored by the “Partnership for Nuclear Security” program under the auspices of the U.S. Department of State, and in coordination with Sandia National Laboratory. In addition, the US Department of Energy (National Nuclear Security Administration), the US Nuclear Regulatory Commission, and the International Atomic Energy Agency participated in the workshop. Officials and scientists from nuclear facilities in five different countries (including the US) took part in activities that included laboratory sessions at the PULSTAR Nuclear Research Reactor Facility on NCSU’s north campus. The participants received instruction from reactor facility staff concerning reactor operations, control rod calibration, neutron imaging, and neutron activation analysis. Other topics covered in lectures throughout the week included nuclear security and non-proliferation, strategic planning and enhancing the utilization of research reactors. 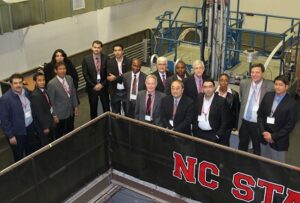