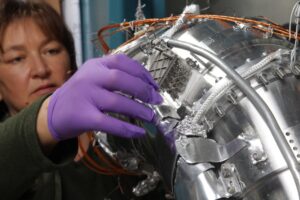 Ultracold neutrons (UCN) are neutrons moving so slowly that their kinetic energies is comparable to their potential energies in earth’s gravitational field. Such low energies, or equivalently long wavelength (10’s of nm), lead to quite unusual behavior compared to cold, thermal or fast neutrons. The most dramatic difference is that, unlike more common higher energy neutrons that penetrate easily through solids or liquids, UCN can be totally reflected at any angle of incidence from surfaces of almost any material. They behave like a gas, filling the available volume in material or magnetic traps:

The traps shown above give an idea of the gravitational (2 foot rise) versus magnetic or material trapping fields. If the kinetic energies of the neutrons exceeds the trapping field even slightly they can escape, becoming “normal” penetrating neutrons. Nevertheless, they can enter the walls only within surface nanolayers, because the interaction cross section is inversely proportional to the neutron velocity ( “1/v” law ) and becomes enormous for the UCN energy range.

The trapping of neutrons is extremely interesting for fundamental particle physics – you can get answers to some fundamental questions about our universe. For example: “What is the reason for the matter/antimatter asymmetry?” In these experiments, the longer observation time and low velocities of the neutrons leads to a significant increase of experimental sensitivity.

For material applications, the strong selective interaction within the surface layer makes the UCN a unique tool to probe surface elemental composition. This can be used as an extension of prompt gamma activation analysis, PGGA, and depth profiling. For many absorbing materials even submonolayer traces can be detected! In addition, UCN can probe the molecular dynamics of the hydrogenated surface layers, which is of interest for molecular membrane and nanocoating research. These will be exciting projects for our facility in the near future.

To convert neutrons produced in the reactor into UCN, one has to decelerate them to almost zero speed, say, 10 feet per second – similar to that of a running person. Now, the average energy of fission neutrons is about 10+6 eV – compared with the UCN energy of about 10-7 eV. So this is what our facility is doing – reducing the neutrons’ energies by 13 orders of magnitude.

How are we doing it? Similar to how one cools a boiled egg – by placing hot neutrons into something cold and big enough to hold them until their temperature equilibrates with the media. This process is called “neutron moderation”. Of course, it is a little more complicated because of such a huge range of deceleration. Neutronic modeling shows that the most optimal design is the 3-step moderation process shown below: 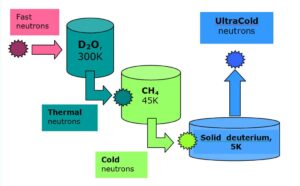 First, hot neutrons from fission are cooled by heavy water to room temperature, after which they are further cooled by entering solid methane at around 45K and become “cold neutrons”. In these two steps, neutrons are cooled by many collisions, each one taking away some energy, similar to how water molecules take away energy from the cooled egg. But at the end they will enter solid deuterium, where the analogy with an egg is no longer valid. Here some of neutrons will loose practically all of their kinetic energy (five orders of magnitude!) at once. This is a type of resonance effect, which happens only when the kinetic energy of the neutron matches one of the possible excitation energies of the deuterium crystal. When this happens, the neutron excites otherwise frozen motion of the molecules and as result, loses all its energy and becomes “ultracold”, with effective temperature of about 1 mK compared to the solid deuterium temperature of 5K. Since ultracold neutrons are not in thermal equilibrium with deuterium, they can be easily heated back up by their next collision. To prevent this, they have to be extracted as quickly as possible from the deuterium crystal. This means that the UCN producing material should be rather thin and placed inside a UCN guide to deliver the neutrons to an experiment.

After learning a little about the principles of UCN source operation, let’s see how it looks in reality. The picture below shows a conceptual neutronic geometry of our facility, designed by Dr. B. Wehring (more details see in publications below). 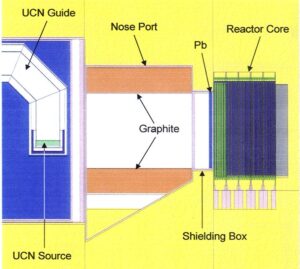 The reactor core is where the hot fission neutrons are produced. Graphite serves as a reflecting channel to deliver them to the moderators, which are placed outside the reactor pool. The heavy water (D2O) moderator fills a large tank, in which an elbow of the UCN guide is immersed. At the very bottom, the UCN guide contains the deuterium crystal and is surrounded by a cap-shaped methane container. Since both the deuterium and the methane have to be cooled down to low temperatures, this part of the facility has to be designed as a cryostat, i.e. a device which allows its inner parts to be at significantly lower temperatures than an outside shell. The next picture shows a section of the 3D engineering design of our source cryostat: 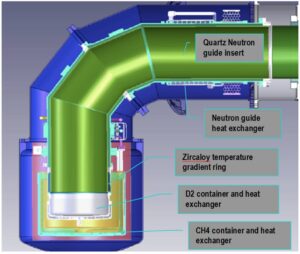 Both methane and deuterium are cooled by flows of liquid helium through the corresponding heat exchangers. The neutron guide above the deuterium container has to be held at a temperature above 50K to prevent deuterium condensation on its walls (deuterium condenses around 18K). To thermally disconnect the two parts of the cryostat a zircalloy section, which has very low thermal conductivity, is right above the deuterium. 3D mesh structures made of the titanium alloy Ti6Al4V, which have an even lower thermal conductivity, will be used as spacers to fix the position of the inner cold elbow inside the warm vacuum shield. Notice that the choice of materials takes into account their resistivity to neutron and gamma radiation (i.e. no plastics) and neutron activation properties, because we would like to have the possibility of working with and improving the cryostat after it is commissioned inside the reactor and exposed to the neutron flux.

The total neutron flux inside deuterium is expected to be about 5×1011 n/sec/cm2. From this amount we expect to convert 104 of them per second into the UCN energy range, and 30% of them should make it to the position of experiments, which is indeed quite efficient: our 3-step moderation will provide a useful density at least 30 UCN/cc per 1MW of reactor power as compared with about 1 UCN/cc per 1 MW at the existing UCN facility at ILL, France.

Finally, you can see a real cryostat (without the outer shell) inside the heavy water tank: 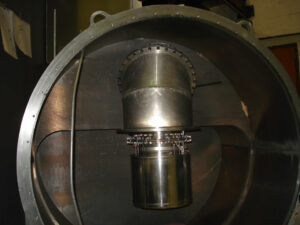 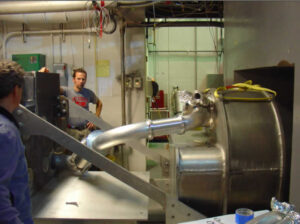 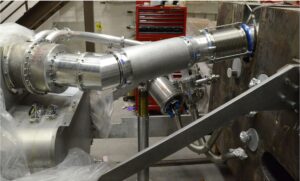 Please contact the Manager of Engineering and Operations if you are interested in learning more about the Ultra Cold Neutron Source.